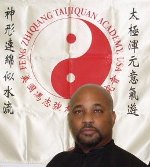 Sifu Herb Parran has taught in the St. Louis area for 20 years. He has studied Hun Yuan Chen Taiji since 1990 under the direction of Sifu Justin Meehan, also has studied with his Master Zhang Xue Xin and his Grandmaster Feng Zhiqiang and other Taiji Masters. Having studied both Chen & Yang style he now focuses on healing and stress reduction and wellness. Sifu Herb was a national champion 1994-1997 with the United States Wushu-Kung Fu Federation. His students have competed in tournaments around the U.S. since 1999. He is C.E.O., of the Chinese Internal Arts Center and also serves as a national Chinese martial arts tournament judge.